A MAX ALLEN RANT! THIS MAY BE YOUR LAST CHANCE TO VOTE. IF YOU VALUE YOUR RIGHT, THEN GET UP AND VOTE! DO IT NOW! 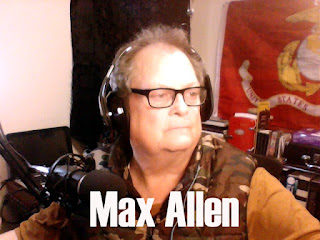 The most important 'Saturday Max' in years.

CLICK HERE TO WATCH A RANT THAT MAKES SENSE:

In just two days' time, that's this Tuesday we hail the most important Election Day in decades, possibly centuries.  This is Election Day, and it stands as the most important election ever.  Never before has our very nation teetered on the very brink of existence.  Our republic hangs in the balance between freedom and slavery, liberty and tyranny.

Never before have more American lives and liberties been at stake.  And not in over two hundred years has the Republic itself hung in the balance.  That is the balance between liberty and tyranny, freedom and slavery, order and chaos.

In only two days you're in charge.  Your vote will make or break the republic in which we live, love, and exercise those God-given freedoms as spelled out in the Constitution of the .

Whether you vote Democrat or Republican, Independent or Libertarian, your vote counts.  Don't let anyone tell you otherwise.  In elections so tight you can't fit a playing card in the cracks, virtually every vote counts!  By way of early voting and absentee ballot many of you have already exercised your sacred right.  For that, you are to be commended.  You are among those Americans who value the priceless privilege of the vote.

Still there are others who, by way of tradition, choose to vote on November 8th; Election Day.  That's awesome!  Once again, you are to be commended for taking elections seriously.  However, today's message is aimed at those who do not vote by choice, those slackers who think they'll always live in a free country while they do nothing to keep their freedoms intact.

It's those of you who either think your vote doesn't count [which is a lie] and those of you who are too damned lazy to get off your rusty dusty and vote.  You are both a pitiful lot, lazy to the bone and ignorant of the very precepts of free government.  And of course, there are those opposed to voting for religious or other reasons.  For you all I can say is, "You sorry, misled bastards.  You have abrogated your rights on all fronts by refusing to fulfill your sacred duty to vote."

When you vote, however you vote and whomever you vote for, you are purchasing the right to bitch and complain, congratulate and salute, the government you have after the election.  Yours is the right because you have become a part of the system.  American citizens have that precious right, as promised under the 1st Amendment, to criticize and challenge those in office.

When you deliberately do not vote you are surrendering any and all rights to bitch and complain, whine or wonder, about the government you have after the election.  That government and all its consequences which fall on your own narrow shoulders and even narrower character are your legacy.  This is a legacy of which you have no right to make comment, at least not to anyone other than yourself.

I am an American.  I vote.  I complain and praise elected officials.  I criticize my government for good and for ill.  I participate in the electoral process that ensures our continued freedom.  I do this because I am more than just a citizen:  I AM A VOTER!

I'm not a 'letter chaser' when it comes to voting.  'Letter Chasers' are those who vote by the party rather than the person.  For example, a man may consider himself a staunch Republican and support the Republican Party Platform.  He may be so involved in being a Republican that he'll vote for virtually anyone who runs under the Republican banner.

One such example is the Republican Voter in who mindlessly votes for Brad Little, Republican Candidate, for governor.  Without studying the candidate's many foibles and flaws, he falls into what I call 'The Alphabet Trap' and lazily votes for the letter "R" rather than what that actual candidate has done or promises to do.  This kind of voting is crime unto itself, a crime of ignorance.  Had he looked into Brad Little's performance as governor he would have found a litany of lies, bad decisions, and egotistical constitutional violations.  Instead, he would have never voted for Brad.

Another such example is the Democrat Voter in who mindlessly votes for Kathy Hochul, Democrat, for governor.  This is obviously a vote for the letter "D" rather than the character.  Had this person delved in a little into her character and beliefs he would have found her platform repugnant and displeasing.  Instead, he would have never voted for her.

This is the story of those who have fallen into 'The Alphabet Trap' and taken the bait hook, line, and sinker.  It's a fact that neither Democrats nor Republicans will always act in our best interests.  It's a fact that both parties are self-serving entities.  But it's undeniable that, at least at present, the Republican Party is 'the least worst' of the two and will be far less chaotic and Marxist if they are brought into power.

THEN GET OUT AND VOTE!

IT MAY BE YOUR LAST ONE!