HEY ALIENS! IF YOU KILL AN AMERICAN YOU'LL BE REWARDED FOR IT! AIN'T THAT A KICK IN THE HEAD! 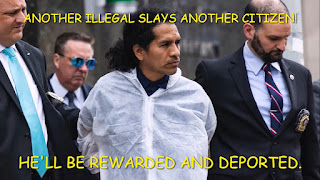 This murdering piece of crap will be free in time for social security!

David Bolona, an illegal alien butchered a mom and stuffed her chopped up body into a bag.  He did it, fact!  He has admitted to it, fact!  He's been given only 25 years in 'club fed' before being deported back to his native .

David Bonola, 44, agreed to do 25 years in prison with possibility of parole in 15.  He is going to the 'Gray Bar Hotel' for chopping up the body of a woman he murdered in the coldest way possible.  The court [God help us] accepted his plea bargain of manslaughter for the brutal slaying of Gaal, who was knifed more than 50 times in her Forest Hills home on April 16.

Damn it to Hell.  Where's the 'Corporal Punishment Solution' I have so long advocated?  Click this link to see: https://highsilliness.blogspot.com/2021/06/aoc-may-be-right-what-am-i-saying.html

Just how in Hell do you take a foreign invader who murders a citizen and give him a sentence in a prison.  Free food, housing, medical care, etc. is his reward for murder.  Life is better there than in the failed state of .  "Come to , murder someone, and get rewarded for it!"

I'm sick and tired of this crap!  On November 8th get off your butts and vote for people who will plug the leaks on the southern border and go after the illegals already infesting our country.  It's time to sweep the rubbish back over the border.  What this system needs in an enema!