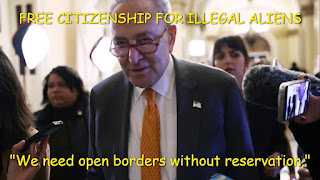 Click here and see what there is to fear: https://nypost.com/2022/11/20/chuck-schumer-admits-democrats-dont-want-any-real-immigration-law/

From the NY Post: Senate Majority Leader Chuck Schumer made some startling admissions last week about his immigration views: “We have a population that is not reproducing on its own with the same level that it used to.  The only way we’re going to have a great future in America is if we welcome and embrace immigrants, the Dreamers and all of them, because our ultimate goal is to help the Dreamers but to get a path to citizenship for all 11 million or however many undocumented there are here.”

The honesty was breathtaking. For so long, Schumer (D-NY) and his party have danced around the truth: They want to legalize anyone coming over our border for any reason.  Schumer wasn’t always this brazen about wanting open borders for all

In 2014, he bragged that President Barack Obama was serious about enforcing immigration law and had “deported more people than any other president.” Schumer used to at least mouth some lines about securing the border when pushing for legalization.  No more.

That’s why it’s so important Americans know that the jig — the idea that Democrats want anything resembling reasonable immigration policies — is up.  But it’s going to require Republicans putting on their big-boy pants and pointing it out.

I'm Max, and that's the way it sucks!