IS THIS THE BEGINNING OF THE END FOR US ALL? 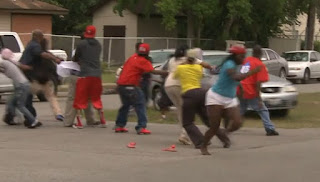 IT'S THE BEGINNING OF THE END!

’ no-cash bail law will turn the state into a chaos of criminality; the 'Black Plague' will shift into overdrive as it swells and spreads in a sea of simian violence and mayhem.  Illinoains will see extreme violence on a grand scale never been imagined.

The unbelievable is about to happen in the state of .  On , at , a very real situation of chaos and crime will unfold.  A bucket-full of Simian Swill and Criminal Violence will swamp the citizens of as the state's 2021 SAFE-T Act comes into effect.

The insane bill called, "The Safety, Accountability, Fairness and Equity-Today Act" completely eliminates cash bail for almost everyone arrested or charged with a crime.  Most judges are progressive activists and, by the words dripping from their own lips, the majority of arrests will result in immediate and 'cost free' bail.  The actual term is 'on your own recognizance', or if you will, 'on your own promise, because we the people trust you to come back on your court date.'  Yah, Sure!

I spoke with recently retired Cook County Judge Robert Ireland who had this to say, "My fellow justices are overwhelmingly in favour of this legislation as it takes the burdens off their back and places it on the backs of the citizens."  He goes on to say, "I have no doubt that in the first year alone we will see tens of thousands of violent criminals released on their own recognizance only to further inflict their crimes on others."

Given an already 'kid gloves' approach taken by judges' prosecutors in , this spells disaster.

We’re not talking about non-violent crimes here.  We're not talking about say, jumping a railway turnstile or shoplifting.  There will be no bail or automatic detainment for second-degree murder, but an ankle bracelet until their court date finally [up to 2 years away] comes up.  This includes Kidnapping, Armed Robbery, Drug-induced homicide, and Aggravated DUI.

Hardened criminals, charged with everything from threatening a public official to armed burglary to arson, will be emboldened and empowered as they know they've been given a 'free pass' to do whatever they like.

To really add fuel to the fire, offenders who have been released with ankle monitors have a 48-hour window to violate their probation before it even becomes a crime.  This means DeShawn and Cletus, both on ankle monitors pending drug violence charges, have 48 hours at a time to go out and do pretty much whatever they want.  They can intimidate or even kill witnesses.  Hell, they can do whatever floats their boat as long as they're back home within 2 days.

In Chicago alone there are over 3,150 people wearing ankle monitors, over 120 of them facing murder charges, 1,100 facing human trafficking charges, over 1,500 facing drug sales and distribution, and hundreds more facing charges of violence and intimidation.

’s ankle-monitor program is already the largest in the nation and is billed as an alternative to incarceration.  More than 75% of those being wearing the monitors face violent crime charges.

The new law gives all of these criminals a 48-hour pass and means they will have the legal freedom to perhaps murder the witnesses of their crime, and the police cannot respond to their ankle monitor alert for 48 hours.

today, your city tomorrow.  Rise up and resist now before it's too late!