MAX AT MIDDAY: An interview with a 'real' vampire! 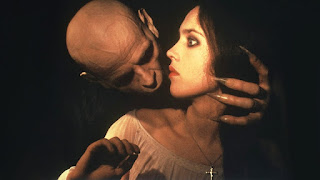 ON A PLANE WITH A VAMPIRE

I was on a flight from to , a long one to be sure.  As I sat with my new traveling companion we fell to conversation.  It didn't take long that I was sitting beside a vampire, an actual member of the un-dead.  He showed me a few things that went beyond parlor tricks, and I quickly realized that what I had here was an opportunity afforded to few journalists.

This is a short but revealing interview I conducted with lots of time on my hands.  This is my interview, a short discussion really, on a plane with a vampire.

Below is a transcript of my interview with a 'real' vampire

ME: Please introduce yourself to us if you will.

HE: My name is Daedelus, and I am a vampire.  I'm not one simply seeking attention nor do I suffering delusions.  I am a vampire, a creature of the night, one of the un-dead.

ME: So, you're a real, blood-sucking, fly-around-like-a-bat vampire.  Can you expound a little?

HE: So long as you do not mock me, I will continue.  My story begins over 645 years ago when I was 'taken into' the family of Dracula, the Prince of The Kingdom of the Un-dead.  At the time of my being 'taken' I was 23 years of age and lived in the city of in .  My mentor, he who 'took me' was Friederich mit der leeren Tasche of the Habsburg House and Lineage.  It was not long afterward that he became known as Frederick IV and ruled as Duke of Austria from 1402 until his 'death'.

Of course, he being a vampire, he never died.  It is regular practice for us to assume new identities after time, usually when people around us begin to take note of our seemingly eternal youth.  He is alive today living still in .

He is ageless, and I cannot begin to guess how old he really is, as he's quite temperamental when it comes to discussing his age.  The closest any of 'us' can guess is about 1,200 years ... give or take a century, [show humour].

HE: Of course not.  Do you think me a barbarian?  I drink animal blood almost exclusively, but on rare occasion enjoy the flavour, the bouquet and body of human blood.  There's a taste difference that a discerning pallet immediately recognizes.

ME: But, you said you don't hunt people anymore.

HE: We won't talk of the past, but I do not fly down from the rooftops or prowl the parks for prey, not people anyway.  Most vampires are law-abiding immortals who wouldn't be 'caught dead' so to speak ... drinking directly from a human.

It's a messy business that.  With today's myriad sexually transmitted diseases and questionable viruses going around we, most of us anyway, only partake of carefully screened blood.

We are largely financially well-to-do and have interests in blood banks, plasma centers, and have access to morgues, mortuaries, and hospitals of course.

ME: You had me worried for a bit.  Tell me of your super powers.  Are they the stuff of legend or is there some truth in it?

HE: My powers: It's funny you should refer to my talents as 'powers'.  I suppose that comes of reading too many Superman comic books.

I, by the way, have every Superman comic ever published since the first, and all are in absolutely pristine condition.  Yes, my passion for comics has left me a most valuable collection among my many other literary works.

Powers, talents, abilities ... let's see.  I am immensely strong according to my own basic constitution.  I have the strength of perhaps a dozen strong men but am not bullet-proof.  I can be shot, stabbed, poisoned, thrown from buildings and all manner of violence can be preferred against me but I HEAL VERY QUICKLY!  I've been run through with a sword, shot with bullets, stabbed and slashed with many edged weapons only to immediately heal and often enact my revenge on he who has assaulted me.

ME: Can you be killed?

HE: I can die but will not tell you how.  Suffice it to say that Bram Stoker didn't get it all right.  I can fly, but only if I transform into a flying animal such as a Raven or a Bat.  Yes, vampires can take on animal form and that form need not meet the physical constraints of a human.  I can, for example, take on the form of a large wolf, a tiger, and even an Indian elephant.  I can dissolve into smoke and pass through even the most skilfully crafted joints and crevices of mortar and stone.  Through keyholes and under doors, that's easy.  I've done that a million times!

ME: Will the sun's rays really kill you?

HE: I am extremely sensitive to direct rays from the sun, feeling only discomfort as long as I stay in strong shade, such as in the shadow of a tall building or the shade of a tree, or under a good parasol for that matter.  It is the naked or lightly filtered sunlight such as through a thin veil of clouds that can harm me.  I avoid the painful presence of sunlight always, living by night as I have for so many centuries.

When I travel in daylight, I am always driven by a manservant who keeps me in the back of the car in total or near total darkness.  Ah, thanks be to whomever invented window tinting!

ME: So, you're saying that sunlight can kill you?

HE: Let's move along.  I am rather well to do, and some would even go as far as to say, 'filthy rich', although that's a term I really don't appreciate.

Having had so many years to invest wisely and set aside a little from time to time.  I can say that my long-term investments have done well, but of course not without losses.

ME: Can you let me in on your investment tips?  You seem to have done well.

HE: Have you got about 600 years ahead of you?  If so, then I would be happy to share them with you.  Otherwise they'd be worthless to you.

It is said that "History is a mirror." and here Li Shiminn, 2nd Emperor of the Qing Dynasty, couldn't have been more right.

I have had the good fortune to live so long as to understand and even predict the repetitive cycles of history as man flourishes, fails, and generally bumbles about with no more aim and focus than a young child.

Keeping this in mind many of us have easily survived times of war and great financial turmoil through the centuries.  We've been able to precious things such as gold, diamonds, and precious works of art and their fluctuating values.  And most of all we've been able to see the swing of the pendulum of governments and civilizations as they wax and wane like the moon.

My name is Daedalus, and I am a vampire.

It was here that Daedalus shut down the interview saying simply that "it is finished.'  He was a brilliant conversationalist and we talked on all matter of things and his own first-hand recollections of memory from over the past 600 plus years.

Few people can be more fascinating than a vampire, so it seems.  His demeanor, carriage, and personality in general were excellent.  This is a man of refinement and class yet with a certain sense of dangerousness that cannot be ignored.  I spoke with him, listened far more than usual, and learned so much from him.

In conclusion of the flight, I asked for contact information, and we exchanged business cards.  I have made an acquaintance with whom I hope to further contact.  I am not afraid of him because I understand him ... to some extent.  I don't expect him to rip my throat out or do any of the many dastardly deeds spoken of in legend, radio drama, movies, and television.

In conclusion I would say, "Let he who is without sin cast the first stone."