MAX AT MIDDAY: "JUST WHAT IS ASTROLOGY?" 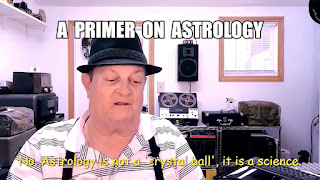 “One of the most ancient sciences ... " Benjamin Franklin

The Mother of all Sciences

What exactly is astrology?  Kings, princes, heads of state and even great men of science have regarded Astrology as a viable and reliable science.  More than mere 'art', Astrology is a blend of science and art in its application.

A great cosmic dance, Astrology is the study of patterns and relationships of planetary motion and position.  The positions and movement of the planets have untold effects on us, and for centuries visionaries and scientists have recognized the importance of this great play unfolding in the cosmos.  Only in recent generations have people in the west begun to discount the value and validity of Astrology.  Its sad how quickly we forget, disavow, and even ridicule that which our forebears followed without question.

To this day many advanced cultures [equally advanced as our own] look skyward and see in that great tapestry of stars and planets, a touch of the divine.  Astrology as practiced in the west in particular is also known as Solar Astrology.  It is my own personal way, and that of many great astrologers, of finding meaning in and of ourselves and others.

Let's address the science in an orderly manner...

First is the question; "Is Astrology a science?"

The answer is, "Yes."  It is a science to be sure, perhaps falling more into metaphysics than the physics of matter.  It stands as an orderly and highly disciplined study of that which is beyond the physical.  It shares similarities with other metaphysical sciences [studying and interpreting energy patterns].  The principles of energy pattern study share much with Feng Shui, Acupuncture, Tai Chi, and even Yoga.

Astrology is often referred to as the 'Mother of all Sciences', being as it is the earliest known ordering of existence, physics, and the existence of all things.  Astrologers observed, recorded, and tracked the movements of the stars and other heavenly bodies before mathematics had the abacus.  Having been in practice since long before recorded history, Astrology has earned the title of the 'Mother of all Sciences.'

Second is the question; "Can Astrology predict future events?"

The answer is, "No."  An unqualified rejection of this premise is native to true Solar Astrology.  The reason for this immediate answer is simple.  According to Doel Cam Nai, "The future remains a mystery because it hasn't yet happened."  That makes sense.

For decades, mostly in the west, confidence tricksters and hucksters have plied the waters of truth.  They've claimed clairvoyance and telepathy, all based on the stars.  Remembering that the future hasn't happened yet, helps us to steer clear of such brigands and liars.

Another great quote, "We are born at a given moment, in a given place and, like vintage years of wine, we have the qualities of the year and of the season of which we are born.  Astrology does not lay claim to anything more." — Carl Jung

And its true, 'real' Astrology makes no claim beyond this description.  It is invaluable in explaining past events in your life.  According to another noted psychiatrist Astrology is, "... the single most effective and accurate tool for analysis of a person's character, psyche, and very psychological existence." — Roland Wallingford III, PhD.  He and Dr. Jung bring clarity and truth to exactly what Astrology is and what it isn't.

Third is the question; "How accurately can one's Astrological Birth Chart analyze his or her character?  Can it really give deep insights unobtainable by other methods?"

Again the answer is a clear and resounding, "Yes".  Many psychiatrists and psychologists of note secretly 'run a chart' [have a birth chart created] on their patients after just their first few meetings.  These counsellors have the highest rate of success in treating the myriad mental aberrations and conditions they encounter in their practice.  Many a patient has remarked, "You know me.  You really know me."  After casting your birth chart the astrologer in question really does know you very well.

So, we've established the following truths of Solar Astrology.

● Astrology is rooted in science, being a science itself.  Astronomy and Cosmology lay at its heart.

● A well cast birth [natal] chart easily exceeds 90% accuracy in most areas and over 80% overall.

So, given these facts and understanding the limitations and strengths of Astrology, it is actually a 'harder' science than Psychiatry for example.  Although the soft science of Psychiatry is widely accepted as a science, Astrology is not.  Even though Astrology is more rooted in repeatable phenomena and result, the prejudice of today's generations disavow even the possibility of astrology's value as a science.

Fourth is the question; "Why don't my friends and others around me believe in Astrology?"

Again, the propaganda campaign launched against Astrology has had tremendous success.  First it was the churches that derided and openly ridiculed the science.  It was Benjamin Franklin, a noted astrologer, who decried the media of the day in his words, "Between church and press it is difficult to ascertain which is more villainous in their persecution of the world's oldest science."  Yes, even as far back as the 1700's, church and press in had ganged up on Astrology.

The reasons for the continued maligning and persecution of Astrology as practice and science are myriad.  The church and press have listened to and promoted naysayers long and hard.  Truth gives way to rumour when it is misquoted or misstated long and loud enough.  In the words of Adolf Hitler, "Tell a lie loud enough and long enough and people will believe it."  He learnt in part from watching state and church as they sowed their clever lies and watched those lies grow into truth.

In the west, science is treated as 'religion' and has been the leading culprit in the maligning and persecution of Astrology.  Feeling threatened by Astrology, and having the upper hand politically, they have long engaged in 'witch trials' of misinformation and propaganda regarding what Astrology is and what it is not.

Unable to prove much at all of what they 'think they know' they defend their 'hocus pocus' conflagration of mathematical formulae and 'guesstimates' of probability to bolster their own image in the public eye.  They defend themselves against an enemy that does not exist; Astrology.  This is by constantly attacking Astrology, a science with a greater success rate than theirs.

Call it jealousy, call it envy, or simply call it the bastardisation of the truth in pursuit of their own elevation ... the fact is that theoretical physicists lead the pack of naysayers in regard to anything that doesn't 'ring their bells'.  Organized into forums, leagues, and fellowships, these physicists have been able to sustain a joint campaign of persecution of any and all things they cannot explain with their mathematical 'hocus pocus' and call their own.

Says particle physicist Joel Wang, Ph.D.  "Yes, they [theoretical physicists] live in a world of their own.  There is no small amount of animosity toward us on their part, doubtless born of their own inadequacies.  As they scribble on whiteboards and postulate theory upon theory, it is physicists in the applied sciences that are getting the job done.  This bothers theoretical physicists to no end.  It's sad too, because there are intriguing elements of Astrology which bear further study."

The church's persecution of Astrology; "Why does organized religion put up a fuss regarding Astrology?"

Clearly there's a bad rap given to Astrology through the centuries.  When people were burning witches at the stake, many of those 'witches' were astrologers.  When people looked anywhere else but to the church for personal enlightenment or direction they would fall prey to the wrath of the church.  Inquisitions have dotted the roadmap of time as Christianity in its many forms has attacked Astrology with unparalleled zeal.  Perhaps it's because some astrologer somewhere claimed to be able to see into the future.  Maybe 'one bad apple' did spoil the whole batch.

Its human nature to live in 'the telephone game' where word of mouth distorts dramatically as it passes from ear to ear.  This same distortion exists when information is deliberately misquoted or misrepresented in order to advance or retard the flow of propaganda.

We can see that, between the dogmatic bodies of 'organized science' and 'organized religion', Astrology has had an uphill fight for the truth for well over a thousand years.  Before the advent of machines and industry, modern science and mathematics, and the paranoia of a burgeoning scientific community Astrology flourished.  There were always quacks in the field of Astrology as there are today in the worlds of theoretical physics and even medicine.  The difference is that theoretical physicists have gained the upper hand through better organization and more sophisticated propaganda.

Fifth is the question; "What does the future hold for Astrology?"

The future of Astrology is bright, even in the dark shadows of today's 'advanced' western cultures.  The , , and are the worst of the propagandists whose voices are most heard in their continuing persecution of all things astrological.  Their distortions of the truth and expertly woven propaganda still bear sway in almost all cases.

However, despite media, science, government, and church, the science of Astrology has been steadily advancing with great determination.  The use of computer software to store entire libraries of personal profiles has taken Astrology far.  Computers now hold astronomical data regarding planetary alignments, positions, travels, orbital times, and even their gravitational effects on one another.

Advanced knowledge of all known heavenly bodies, most importantly those in our own solar system, has been compared between many Astrologers, Cosmologists, and Astronomers.  They've found a fantastic unity of science and idea.  This knowledge, coupled with an enhanced understanding of gravitational waves [only recently 'discovered' by modern science] has really given astrologers a leg up in casting Birth [] Charts with increased accuracy.  We've seen 'average' results in accuracy rise from 80% in 1880 A.D. to over 90% in a recent 2020 A.D. study.  Yes, in just 140 years we've improved accuracy of astrological character assessment by over 10 percentage points!

Computers allow us to cast a chart and interpret and print it in a matter of several hours instead of the days or even weeks it once took.  When I first entered the field of Astrology and got a good grip on it, computers were not yet in use in the field.  It would take me a hundred hours to cast a decent chart and write up an evaluation summary.  Now, with computer software and internet resources I can cast a chart superior to any I have done in the past.  I can do this in a matter of say, 20-30 hours, or even less!

However, even with high-powered computers, massive databases, advanced algorithms, improved software, and a continuing flow of new information from tens of thousands of sources, nobody can as yet predict the future.  As for astrologers at large predicting the future?  Nah, not yet!